— The astronauts who lifted off on SpaceX's first operational crewed mission for NASA are proving 'this is the way.'
A few hours after launching to the International Space Station on Sunday (Nov. 15), the Crew-1 astronauts showed off their fifth crew member — a small plush doll of 'The Child.'
'And as you can see live, they have now revealed to us the zero-g indicator and it looks like a little baby Yoda!' said SpaceX engineer Jessica Anderson, describing the doll as she provided live mission commentary on NASA TV.
The toy, modeled after the character from the Disney+ Star Wars series 'The Mandalorian,' is part of a long tradition of astronauts flying small dolls to signal when they enter orbit. The toys, which are generally tethered to a wall or other anchor, begin to float about the cabin when the launch phase of the flight ends, indicating that the crew is in zero-g.
The custom began on Russian spaceflights, dating back to the first launch of a human into space in 1961. Soviet-era cosmonaut Yuri Gagarin carried a small doll with him on his Vostok 1 mission to watch it float. Since then, the zero-g indicators have varied from homemade dolls to off-the-shelf, commercial toys.
SpaceX adopted the practice with its first test flight of the Crew Dragon spacecraft, launching a plush doll of the planet Earth on its 2019 Demo-1 mission to the space station. The Celestial Buddies' Earth was then joined by a sequined apatosaur, 'Tremor,' which was chosen by the sons of Demo-2 crewmates Bob Behnken and Doug Hurley.
The 'Little Earth' and dinosaur toys returned home with the Demo-2 astronauts earlier this year.
It was not yet clear why the Crew-1 astronauts — commander Michael Hopkins, pilot Victor Glover and mission specialists Shannon Walker and Soichi Noguchi — selected 'The Child' as their zero-g indicator, though it might have something to do with their backup, NASA astronaut Kjell Lindgren.
A self-professed 'big Star Wars fan,' Lindgren convinced his crewmates on an earlier space station mission to dress up like Jedi for a NASA promotional poster and he picked out an R2-D2 toy to serve as the zero-g indicator for his 2015 launch on a Russian Soyuz spacecraft.
Hopkins, Glover, Walker and Noguchi were just beginning a 27-hour rendezvous with the space station when they displayed The Child on board the 'Resilience,' the name they gave their Crew Dragon spacecraft. 'Baby Yoda says you guys can come back on board,' said Glover, giving the flight controllers permission to turn on the cameras aboard the capsule.
The astronauts are expected to dock at the station on Monday (Nov. 16) at about 11 p.m. EST (0400 GMT on Nov. 17). After arriving, they will join other astronauts and cosmonauts to form the Expeditions 64 and 65 crews during their planned six-month stay.
In the meantime, The Child will continue to float around.
'As we get more views inside the cabin, we will have to keep an eye out and see if we might spot him again,' NASA mission commentator Leah Cheshier said.

Including toys in SpaceX space travel has already become a tradition.
This article was translated from our Spanish edition using AI technologies. Errors may exist due to this process.

The live broadcast of the SpaceXCrew Dragon launch this November 15, bound for the International Space Station (ISS) is always an event. It generates a lot of emotion and expectation of what will happen, of course this time was no exception, mainly because there were five and not four crew members who were seen. 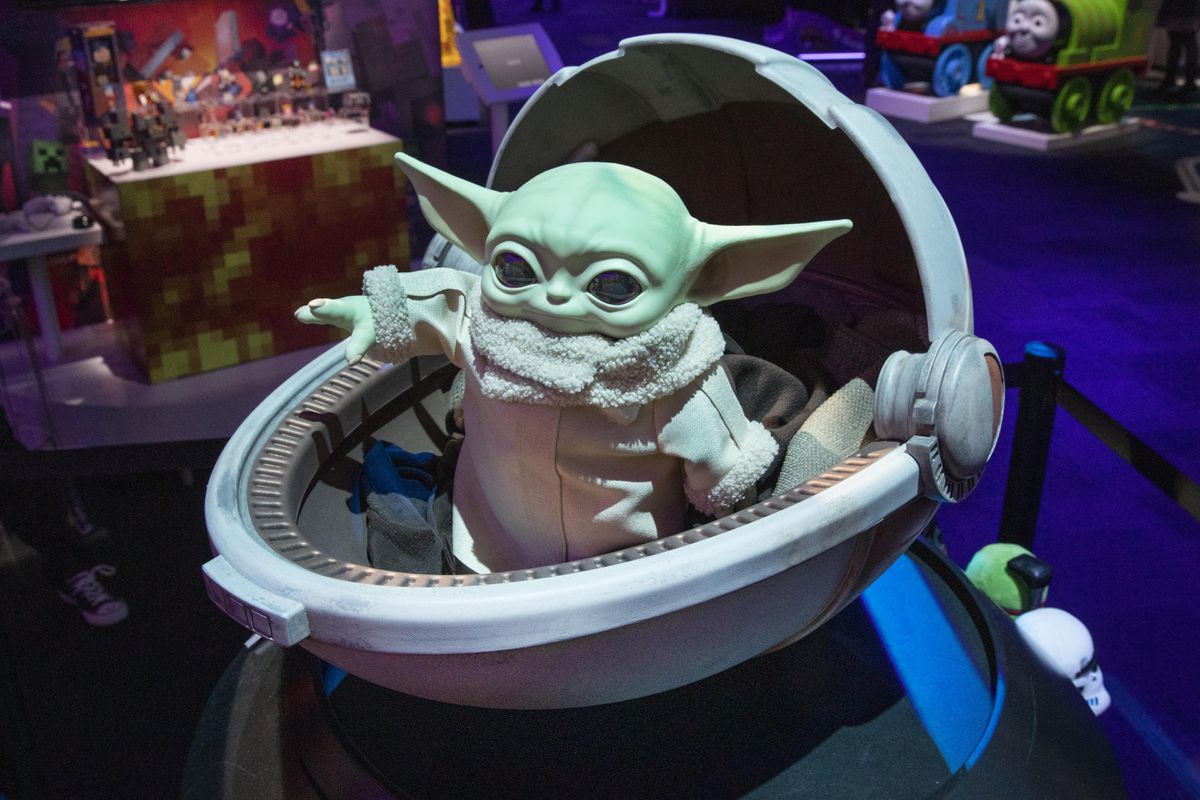 Astronauts Shannon Walker, Victor Glover, Michael Hopkins and Jaxa specialist Soichi Noguchi from Japan had a very special companion: 'Baby Yoda' . The popular character from the series ' The Mandalorian' , could be seen in the form of a stuffed animal in the video of the ship.

Baby Yoda has arrived at the Space Station with the NASA crew. All good pic.twitter.com/3ywEIWVsJS

Bringing toys on board has become a tradition for every Elon MuskSpaceX trip. Last May, when the first manned trip was made by a private company, NASA astronauts Douglas Hurley and Robert Behnken, transported a small colored dinosaur which they called 'Tremor', chosen by their children. In addition, in 2019, when the Crew Dragon test trip was made, there was a doll in the shape of Planet Earth named 'Buddy' on the ship.

The dolls are an indicator of zero gravity to corroborate that the Earth has been left, but in addition to their function, they steal hearts, laughter and expressions of astonishment.

'We've got Baby Yoda on board' It's now a @SpaceX tradition to bring a 'zero-gravity indicator' toy aboard spaceship launches. The first was a plush Earth doll, and the second a glittering Dinosaur toy. #[email protected]/hlruZzUJ1s

An example of this is that every toy that goes out into space is sold out in a few hours after launch. For what we hope, the same thing happened with the little 'Baby Yoda', an already popular character.

May the force be with the Crew Dragon astronauts!