A high-level overview of TLS/SSL and the OpenSSL tool, creating private keys and CSRs, and an introduction to the Internet PKI.

kubectl get secrets NAME TYPE DATA AGE backend-tls kubernetes.io/tls 2 3m18s frontend-tls kubernetes.io/tls 2 3m18s Deploy a simple application with HTTPS In this section, we will deploy a simple application exposing an HTTPS endpoint on port 8443. Openssl installed locally; often pre-installed by the OS install; Please note: While I tried using both MicroK8s and Minikube local clusters, I ended up writing this article using an Amazon Elastic Kubernetes Service (EKS) cluster because I could not reliably get Telepresence (covered in the next section) to work with either of them.

This article is part two of three covering encryption concepts and the Internet public key infrastructure (PKI). The first article in this series introduced symmetric and public key (asymmetric) encryption in cryptography. If you're not familiar with the basic concept of public-key encryption, you should read part one before you go ahead with this one. In this part, I show you the basics of Transport Layer Security and Secure Socket Layer (TLS/SSL), how the Internet PKI works, and OpenSSL, the Swiss Army knife for TLS/SSL tasks. I cover how to use OpenSSL to create key-pairs and to generate a certificate signing request (CSR) to send to your certificate authority (CA) for signing. After that, I discuss some weaknesses of the Internet PKI you should be aware of.

[ You might also enjoy: Security advice for sysadmins: Own IT, Secure IT, Protect IT ]

Assume that you're a sysadmin like me and one of your tasks is to manage a webserver. Because your users care about authenticity, integrity, and privacy, you'd like to secure your web application with some kind of encryption.* You don't know in advance who's using your site, so symmetric encryption is off the table because of its key distribution problem. I use public-key encryption in the following sections instead. 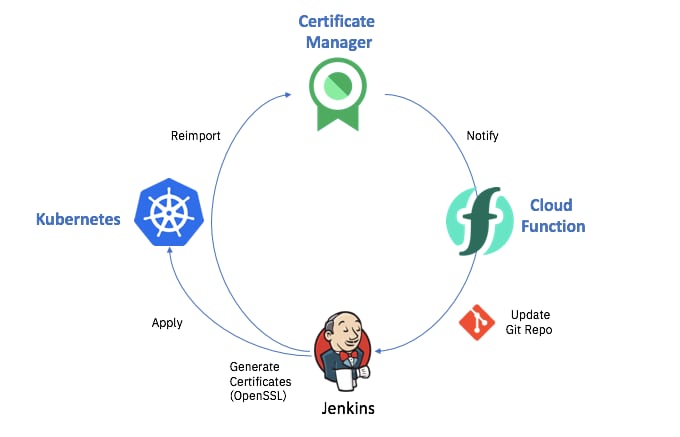 The acronyms for Transport Layer Security and Secure Socket Layer are TLS and SSL. They are used interchangeably most of the time, and that's OK. While the old SSL protocol versions are deprecated, you'll usually find TLSv1.2 and TLSv1.3 on the web these days. TLS is used in HTTPS connections between some clients and some web servers. The following image shows a simple example of an HTTPS handshake.

Users access the API using kubectl, client libraries, or by making REST requests. Both human users and Kubernetes serevice accounts can be authorized for API access. When a request reaches the API, it goes through several stages, illustrated in the following diagram:

For more information, see Controlling Access to the Kubernetes API.

All Kubernetes clusters have two categories of users: service accounts managed by Kubernetes, and normal users.

Normal users are assumed to be managed by an outside, independent service. An admin distributing private keys, a user store like Keystone or Google Accounts, even a file with a list of usernames and passwords. In this regard, Kubernetes does not have objects which represent normal user accounts. Normal users cannot be added to a cluster through an API call.

API requests are tied to either a normal user or a service account, or are treated as anonymous requests. This means every process inside or outside the cluster, from a human user typing kubectl on a workstation, to kubelets on nodes, to members of the control plane, must authenticate when making requests to the API server, or be treated as an anonymous user.

Kubernetes uses client certificates, bearer tokens, an authenticating proxy, or HTTP basic auth to authenticate API requests through authentication plugins. As HTTP request are made to the API server, plugins attempt to associate the following attributes with the request:

This would create a CSR for the username “jbeda”, belonging to two groups, “app1” and “app2”.

See Managing Certificates for how to generate a client cert.

Determine Whether a Request is Allowed or Denied

Kubernetes authorizes API requests using the API server. It evaluates all of the request attributes against all policies and allows or denies the request. All parts of an API request must be allowed by some policy in order to proceed. This means that permissions are denied by default.

In the RABC API, a role contains rules that represent a set of permissions. Perminssions are purely additive (there are no “deny” rules). A role can be defined within a namespace with a Role, or cluster-wide with a ClusterRole.

A Role can only be used to grant access to resources within a single namespace.

A role binding grants the permissions defined in a role to a user or set of users. It holds a list of subjects (users, groups, or service accounts), and a reference to the role being granted. Permissions can be granted within a namespace with a RoleBinding, or cluster-wide with a ClusterRoleBinding.

A RoleBinding may reference a Role in the same namespace.

A RoleBinding may also reference a ClusterRole to grant the permissions to namespaced resources defined in the ClusterRole within the RoleBinding’s namespace. This allows administrators to define a set of common roles for the entire cluster, then reuse them with multiple namespaces.

Finally, a ClusterRoleBinding may be used to grant permissions at the cluster level and in all namespaces.

4. Test the config and RBAC rule.